Apparently it's against the law not to be woke, and you can now be arrested for posting the Pride Flag rearranged as a Swastika, so that's what I'm doing. I'm Spartacus! 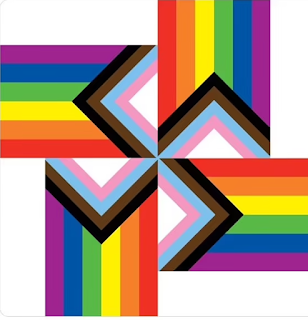 The opening lines of a Jonathan Swift pastiche.

of his day. Below is the opening of my pastiche of Swift's scatological masterpiece

Her piercing voice, her constant scheming;

The diva from their bedroom issues,

Is now with foul portent imbued.

His senses reel in disarray

From devil’s dandruff berm on tray.

His bloodshot orbs take in the mess

She made in her contrived distress, 10

Whereof to aid the Reader’s gist,

First is the smashed up China plate,

The frisbee she aimed at his pate;

Baroque with hipster equal made

By the stilettos of the jade.

Ask not of Plato what there is.

Of foodstuffs smeared on surfaces: 20

In sticky pond of Belgian beer,

Mixed with the vegan canine cuts

For her hair-trigger yap dog mutts,

To satiate her high-strung cat,

Floats in a greasy oozing sea

Of vinaigrette and sesame.

From bottles slither at their ease

The ginger soy which ere annointed

That puffa fish which disappointed.

Slain by the lance of Amber’s heel.

Hard by the suppurating quince

Not wiped away this six month since,

Of mouldy pans in oily slick

Over the penicillin fuzz.

One thinks to see a crocodile

And nose beneath the unscrewed lids.

Next on Depp’s aching eyes impose,

And eke assail his tender nose, 50

The contents of the pedal bin.

On nameless skidmark as it dries.

The multitudes of maggots writhe

As nymphs in loathsome puddles blithe.

A sonnet I wrote probably three years ago

The following sonnet, from my Odes, Epigrams, & Further Sonnets, was written a few years ago. It's a straightforwardly Shakespearean sonnet: the iambic pentameter is fairly strict throughout, and the rhyme scheme observes the Shakespearean abab cdcd efef gg format, although it has to be conceded that one or two of the 'rhymes' take a certain amount of liberty with the concept of rhyme - thinking in particular of "pot pourri/Furies".

Although the mood is Autumnal, nevertheless I think it answers to the catastrophism of present times.

Reflections upon an Indian Summer

I’d dip my feather in my stinkpot’s bile

and fish out defamation, hangman’s rope,

For this autumnal balm’s but seasoning,

will dog the path across the waste, the pound

collapse, and legions of the destitute

This Autumn, though, it still looks pretty cute.

of warning signs we tactfully ignore.

Proforma Declaration for Use in Initial Dealings with Businesses, Schools, Universities, Charities, and Officialdom.

It’s got to the stage at which, during my initial dealings with any business, governmental or quasi-governmental agency, school, university, charity, or any other organisation, I always preface discussions between us with the following declaration:-

I have zero tolerance for wokeness. Black Lives Matter is a racist hate group. A man is the producer and emitter of small motile gametes whereas a woman is the producer and carrier of large immotile gametes, and women's needs for female-only spaces trump the trans demand for equal treatment. I do not tolerate having my language policed, and any attempt to introduce woke agenda into our discussion will result in its immediate termination and the immediate termination of any business between us.

Anybody with a Pet Parrot near Bristol who Fancies Earning Fifty Quid?

Several years ago I wrote a full-length parody of the Mayor of Casterbridge. Pretty Poli relates the tragic history of Hawksmoor Perroquet, a ketamine-addicted African Grey parrot and a newcomer to Bristol. Hawksmoor sells his wife gormless budgerigar Arabella Melopsittica and their egg to a passing ornithologist, before swearing off his substance of choice. In his newfound state of sobriety his motivation returns, and he embarks on an ascent of the greasy pole of human endeavour as an architect of the hipster bars patronised by Bristol's jeunesse doree. His success brings him to the attention of a provincial merchant banker, the depressive pervert Sir Hearty Luncheon, who installs him as his puppet Mayor of Bristol. And then his wife rematerialises with their presumed chick, the hybrid Isolde Acridotheres, precipitating his downfall.

Pretty Poli has been rotting on Kindle for several years, selling a few copies here and there. I think it deserves better than this, and am planning to produce a softback edition. To this end I will need a front cover. And this is where the putative parrotist comes in. If there is somebody in or near Bristol who owns a largish reasonably docile parrot and would like to earn £50 for an hour or so of their time, here is what I propose.

We meet at a location of your choosing. I will be wearing a suit, and you are to photograph me holding your parrot, much as if I were Sir Hearty and your parrot were Hawksmoor Perroquet. Although it would be ideal if your parrot was an actual African Grey, I'm not too fussy about this, and you can use my phone to take the photos. When you have taken a decent quantity of photos, I give you 50 quid, and will also throw in a coffee or two or a pint or whatever. N.B. I own the copyright on the photos. That's about it.

If interested in this project please email me at rmcraven1@gmail.com.

Obituary of my father 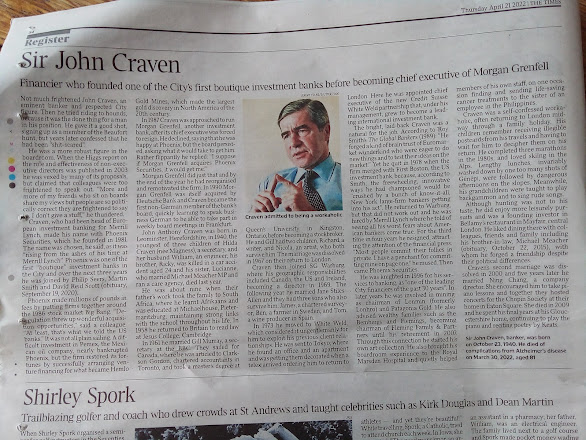 From the Odes, Epigrams, & Further Sonnets

Ever since completing my 155 sonnet cycle five years ago, and in between writing Helix Folt and more recently The Wokeiad, I've been accumulating a further fairly random collection of verse under the heading of "Odes, Epigrams, and Further Sonnets". I was scrolling through this collection this morning, and it struck me that the following number was appropriate to the season:-

Upon a Winter Strop & a Coupling

Astonishing, the corner being but turned,

how this cobwebbing, close and fretful mist,

through which no sun excoriating burned,

is swift dispelled by solstice flip or twist.

how animal awakes and, squealing, fucks,

yet afterwards is sad tho’ woman’s gay.

When mantis with her praise his head devours

his cadaver’s in spasm for some hours.

Apparently it's against the law not to be woke, and you can now be arrested for posting the Pride Flag rearranged as a Swastika, so that...

Amoeba Dick
Bristol, United Kingdom
This blog is a presentational platform for my writing, which consists in high burlesque literary fiction & drama, formal verse, and analytical philosophy. More detail:- (a) Novels - My Bristolian series consists in three completed novels, viz. my Moby Dick parody Amoeba Dick, my Mayor of Casterbridge parody Pretty Poli, and my Ulysses/Odyssey parody Odour Issues. I'm presently writing Helix Folt the Conservative, which is a parody of George Elliot's Felix Holt the Radical. (b) Poetry - My verse is almost entirely in iambic pentameter. Thus my 155 sonnet collection, and the Montpeliad, my 620 line heroic couplet satire of Bristolian degeneracy. I've won a couple of prizes for sonnets, and the Montpeliad got published in Bristol 24/7 in June 2016. (c) Drama - my Jacobean revenge tragedy The Senseless Counterfeit, in iambic pentameter like my verse, is presently in pre-production. (d) Short stories - a number of examples are posted on this blog. A couple of these have been published in a couple of places. (d) My philosophy PhD thesis.